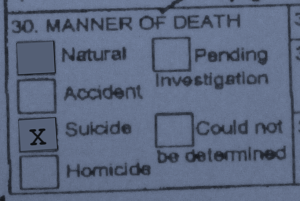 This month, I’m exploring how and if we could end death for good. The image you see is from the Manner of Death box on Alaska’s death certificate. I see them at work sometimes and I thought it was a good framework for examining how difficult, if not impossible it might be to “kill death.”

In fourth grade, I began to cry in school. I wasn’t even sure why most of the time. It was humiliting. I was the kid who, if I fell behind in the spelling test, would have just failed silently, but I was shocked when I found myself yelling, “Slow down!” and crying. The teacher, who had waited too long to give the spelling test, threw the words at us three minutes before recess, and I got lost. She made me stay in with a student who volunteered to give me the rest of the test, but I couldn’t stop crying, and even if I could have spoken, I wouldn’t have known what to say.

Sometime later that year, our class was called to the gym for school photos. Surrounded by lightning flashes from an army of cameras, the photographer told me to smile. I turned the corners of my mouth up, but really, I was hoping he would see that I was not happy. I wanted him to tell someone, anyone, I was sad. I don’t know why, even as a fourth grader, I thought a stranger would read my life in a forced smile and help me.

The turning point came one day my mom opened the bathroom closet and I saw it; the spray bottle of cleaning solution on the third shelf. I wondered if it would kill me if I drank it.

Where did that thought come from?  Startled, I walked to my room and climbed into bed where I had spent so much time lately and snuggled with a stuffed animal. I realized I needed to be there to take care of him, so I hugged him and told him he had probably saved my life.

What caused my depression? I was nine, so life was about my friends and all but one announced they were moving over the summer. I saw those girls everyday, and everyday I was reminded they wouldn’t be there for me next year.  The empty lot where I sat and watched the lights twinkle across the Salt Lake Valley was replaced by another suburban McMansion. I worried the pilot light in the water heater would start the house on fire. All of them childish concerns, but did all those things combine to overcome my will to live, if only for a short time?

It’s never happened since. Have I learned to cope?

Given my worry-prone personality, could it happen again? My depression deepening so slowly that I wouldn’t see it before a bottle of cleaner went from a reminder to clean the bathroom, to a poison?

Not only did my condition surprise me after months of suffering, my parents didn’t figure it out either. It wasn’t until the teacher called my mom and told her I was disrupting the class with my spoiled, attention-hungry crying that my mom knew something was wrong. “That’s not Laura.” She said as she hung up the phone and called the family doctor. By the time I saw the doctor, she determined I was getting better, but I had already had the poison incident. If I had been just a little worse off, a little sadder for a little longer, would I have gone through with drinking the cleaner?

That’s why I think it would be impossible to rid the world of suicide. The suicidal thought I experienced didn’t seem like it was even mine, and yet the mood problems I had were equally unlike me and they didn’t prompt me or anyone else to get help. I just sank into the reverse drowning that is depression. Sometimes it’s just too hard to see until it’s too late, or… almost too late in my case.