In an earlier post I discussed one of Alaska’s Pacific salmon. They have a life cycle that appears to benefit their species. They are born in streams, travel to the ocean where there is more food, and then hormonal changes tell them to return to the stream where they spawn. When they are done spawning, they have not eaten since leaving the ocean and their immune systems have failed, so they die, leaving the streams and oceans to their fry. Could we humans have a evolved to die after reproduction to make room for the next generation?

It’s an attractive theory. At one point in embryonic development, the human hand and foot is shaped like a paddle, then a signal tells the cells between the fingers and toes to self-destruct, and they do. Could we be “programmed” to age and die?

Most experts say no. Early humans were thought to have had short lives. Many didn’t live long enough to become old and even if they did, their long lives could have been simply due to luck, not longevity genes they would pass on to the next generation.

Further, if aging-related diseases are programmed to take us out, how could natural selection select them? If those diseases strike in our fourties, fifties, or sixties, we’ve likely already passed on our genes so selection is weak to non-existent. 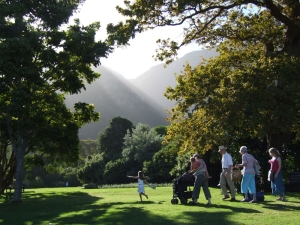 There is one theory however, that addresses the importance of the elderly: The Grandmother Hypothesis. It postulates that grandmothers who could care for the children allowed parents to keep more children alive. Humans have big, complex brains and an unusually long adolescence while they develop.  It may be that humans could afford a longer and longer brain development period when there were more adults around. Human longevity and intelligence may have evolved hand-in-hand. Yet once again, Grandma may have survived by luck and may not have any longevity genes at all. Further, she probably did not pass on any genes that would cause self-destruction either.

In closing, it makes sense that Pacific salmon, who don’t spend any time with their thousands of young, would benefit from putting all their energy into reproducing, then dying. It also makes sense that human aging is a product of chance, not design, but  we’ll discuss more theories in future posts.