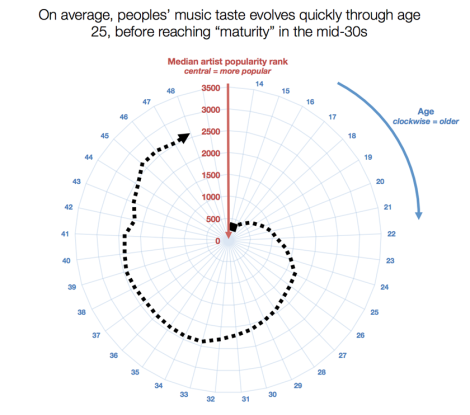 It’s my birthday today, and according to a new study based on music people stream on Spotify, I’m at the edge of where I will stop liking popular music.

The new study showed that teens tend to listen only to the latest hits, twenty-somethings listened to fewer of the most trendy songs and and after 33, it dropped rapidly. Apparently, I only have one more year of appreciating the occasional, and I mean occasional, Taylor Swift song.

Though the study was based on informal data gathered about people who are tech savvy enough to stream music, other, more traditional studies had similar conclusions.

Dr. Adrian North, of the School of Psychology at Curtain University in Australia believes that taste in music crystallizes around the ages 16-24. After that, people do listen to new music, but have a preference for music similar to what they found interesting when younger. The difference is people look for music that is more “complex” than what they started out enjoying.

This is a fascinating concept for someone who is writing a novel with characters who, thanks to a rare gene, survive for hundreds of years. What music does someone born in 1465 like today? What about 1765? Just like anything, I suppose it depends upon how willing a person is to accept something new. One of my characters is, and one is not.

Today, I might unwrap a CD or two and look back. At 14 or 15, the first CD I ever bought was the Backstreet Boys, but I was more motivated by the picture on the cover. Not long after that, I bought multiple albums by Celine Dion, Jewel, and Jimi Hendrix (popular before I was born by the way). In the middle of my last decade I went through a bluegrass phase and I still pull those CDs out once in a while. I still listen to the radio, but I channel surf as soon as something I don’t like plays. Hozier is one artist I picked up last year, this year. Now I’m waiting for Florence + the Machine’s next album.

Here’s How Your Taste in Music Evolves As You Age, According to Science