Picture by jdurham on morgueFile.com

Last week I explored the life cycle of pacific salmon, which make the ultimate sacrifice for the next generation. After they spawn, they age and die rapidly, leaving the resources in the streams and the ocean to their young. Should humans live short lives too? 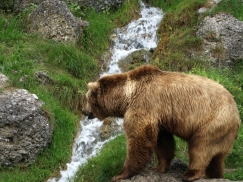 Salmon parents perish and all their experience goes with them. They can’t teach their young where to find food, or how and when to migrate to the ocean and back again. It’s a dangerous journey. Bears stand at the top of waterfalls for salmon to jump into their mouths and well-fed seals wait at the mouths of rivers and snag as many  as they can eat. 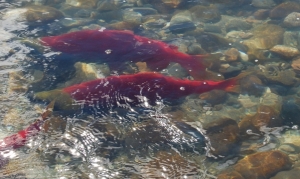 Yet this reproductive strategy works  because salmon lay thousands of eggs and even if just one or two survive to reproduce, it may be enough to hold the population stable. Further, salmon young live primarily on instinct with no need for parental investment. Human children are way too helpless for way too long and our big brains create a long adolescence for us while they develop. (See this article about the benefits of our long adolescence http://ngm.nationalgeographic.com/print/2011/10/teenage-brains/dobbs-text.) Our survival strategy is to put all our eggs in a few baskets, but to watch those baskets. It seems to be working so far. 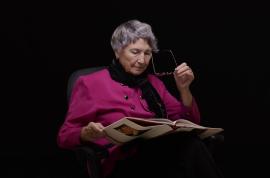 Photo by Verbaska on morgueFile.com

Human groups that had long-lived family members might have raised more children to reproductive age, despite the drain on resources extra people might present. Keeping track of children might have been easier than hunting and gathering so it could have been left to the elders. Even today, in Barrow, Alaska, where people have stayed close to their roots, Inupiat children are often raised by grandparents or older relatives. I’ll post a little later about the limitations of the grandmother effect, but it may have created families that produced longer-lived humans.

So that raises the question.

Is natural aging something to be desired? Should we not treat aging like a disease that needs to be cured and let our lives play out?

Living long enough to impart what we have to give, be it education, a career, or raising a child, and then getting out of the way?  If you are an older worker, do you make way for new, better workers if you die or retire? Or is your experience more valuable than that of younger workers? If you are new to a career field, do you bring better ideas than people who are old and set in their ways? Or do you just make the same blunders that someone else learned to avoid? 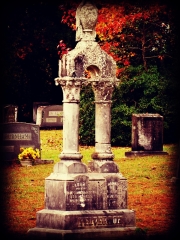 Some theories assume that the purpose of human aging is to get older members out of the population and distribute resources to the young. Some have proposed that genes turn on that cause aging to create death in the older members of the population. Those theories have been largely dismissed and I’ll discuss them in later posts, but it seems from a natural selection standpoint, humans aren’t meant to have extremely short lives. Our children don’t possess many instincts and they take a long time getting to adulthood. Our species doesn’t benefit from high adult turnover, but is there such a thing as living too long?

We’ll talk about that in Part III.