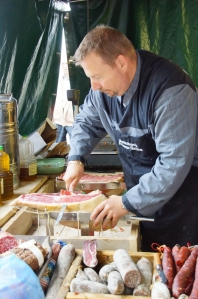 Photo by Jusben on morguefile.com

Would you change your diet to live longer?

If you are middle aged, 50-65, you might be able to do just that. (Could middle age become later and later in life? See my post, Road to Immortality, for more about increasing lifespan. https://lalancaster.com/2013/11/09/the-road-to-immortality/

A new study published March 4th in the journal Cell Metabolism reported that middle aged people who ate a diet high in animal proteins were more than four times as likely to die of cancer. A rate comparable to smokers. Why? It’s proposed animal proteins  increase production of a growth hormone, that nurses tumor survival and growth. In contrast a diet where protein comes primarily from vegetables, does not increase the risk of cancer since vegetable proteins don’t stimulate growth hormones as efficiently.

This study lasted 18 years however. What about those who lived beyond 65? Researchers found that a diet high in protein protected against frailty and allowed them to maintain a healthy weight.

All this makes me wonder…

I’m thirty, what do they recommend for me? It may make it another post soon.

Did the advantage of eating animal protein after 65 evolve with people who took care of their elders by giving them meat and elders in turn increased the survival rate of children by being an extra hand? This is called the grandmother theory (see my post https://lalancaster.com/2013/10/19/how-long-shoul…st-about-right/ for more about it.) On the other hand, early humans likely did not live that long, so it may just be  a product of biology, untouched by evolution.

How many people are willing to change diets to reduce their risk of cancer? I don’t know if I could reduce my portions of  animal proteins like cheese and ice cream very easily. Meat? Maybe I’d find it a little easier. What about you?

One response to “A Diet for the Ages”