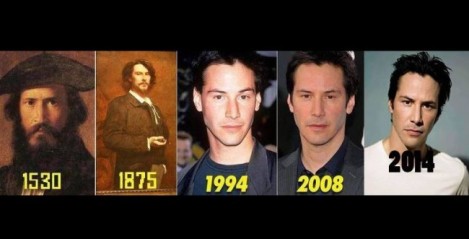 Some people (fans?) assert Keanu Reeves is immortal. They cite that he is fifty but still looks twenty, even though he has never visibly aged or had plastic surgery. Some believe he keeps surfacing throughout history since he looks similar to historical figures like Charlemagne and the 19th century actor Paul Mounet. (If he is the latter, his 135 years of acting experience have not taught him to act.)

I have characters in my novel who reverse age and become younger due to a rare gene, but does anyone actually believe Keanu is an ageless time traveler or vampire? Is it a joke? Below are some websites and you can decide for yourself.